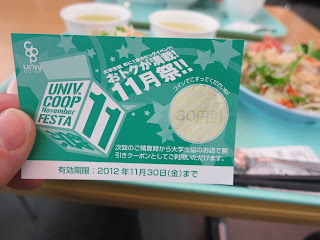 Our university coop seems to have started their annual November lottery style thing again. I got a scratch ticket with my lunch today.

And unlike my colleague, I won! A whopping 30 yen that I promptly used when paying for a bottle of cold tea in the coop store.
Posted by Jonas at 12:55 AM 1 comment:

In Tokyo for a day

On Monday I had to go to Tokyo for a project meeting. That meant getting up at 6 a.m. and getting back home at 23:30, so I was a bit tired... The meeting was not all that fun either.

I did have a fun stewardess in the plane to Tokyo though. I was bored in the plane and kept practicing some different ways of shuffling cards etc. She looked at me and seemed to be about to say something a few times during the flight but never did say anything. After we had landed and we were waiting for the doors to open she came up to me and asked: "Are you magician?" I answered in Japanese that it is not my main job, but that I do magic in a magic bar during the weekends.

She was very impressed that I could speak Japanese despite being blond, and after learning I was from Sweden she mentioned that she had a friend who married a Swede and moved to Sweden. She also said she would come to Hokkaido again next week, so I gave her the business card of our magic bar. It would be fun if she actually shows up in our magic bar.

The plane was otherwise full of high school students who had been in Sapporo on some school trip. There were more than 100 of them! (The line between Sapporo and Tokyo is one of the few domestic flights using Boeing 777-300s, so there was space to put all the kids). Another colleague who flew on a different flight said his plane was also full of high school students on their way home.

I had planned to have an hour of shopping in Tokyo (booking a really early flight) and having plenty of time to find the place of the meeting. My professor showed up on Friday afternoon and said that he had decided that we should have a meeting one hour before the project meeting in Tokyo, so my plans were destroyed. I did reschedule my travels and ended up having almost 30 minutes of shopping and a lot less time for travelling and finding the meeting place.

I did manage to buy a few weird t-shirts. One shop owner told me that a guy who used to work in the same store had now moved to Sweden and was very impressed with the Swedish society.

Later, when trying to find the meeting place, I passed two European looking men walking in the opposite direction. They were speaking Swedish to each other! There are very many foreigners in Tokyo compared to Sapporo, so I saw several in one day, haha.

At the meeting, I was supposed to show our system but my professor ended up using up all our allotted time (and some more) so there was no time to show our system. On the way back to Sapporo, the airline rescheduled me to an earlier flight, so I got home slightly before midnight instead of slightly after, which was nice. The stewardess on the way home also asked if I was a magician. She did not seem to have any friends who had moved to Sweden, but she had a father who did magic, she said.

Dinner with a friend 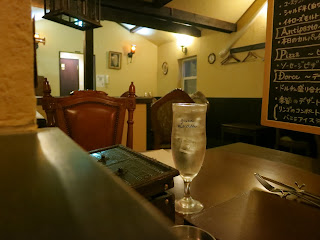 On Sunday I took the day off from the magic bar, since I had to fly to Tokyo really early in the morning on Monday. That meant I had time to hang out with a friend.

My friend suggested an Italian restaurant called "Le Creer" (which looks more like a French name) that she said was surprisingly cheap. It was. We ordered "assorted entrees", "assorted entrees, hot", pasta (gnocchi in Gorgonzola sauce; extremely good), a pizza (half of it with mushroom and potato, half with mozzarella cheese and tomatoes), a main dish called "10 types of baked vegetables" and another main dish which was stewed beef. We also had assorted teas during dinner, and more teas after we were finished with the food. 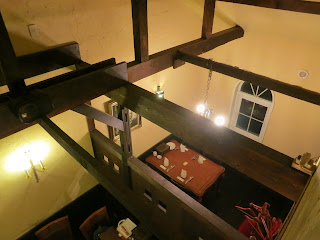 All the food showed up in quite large amounts. Pretty much all of it was excellent. I especially liked the gnocchi, the pizza, the stewed meat, the focaccia, the garlic toast, and various other parts of the entrees. We had way too much food.

The interior was very nice (and the exterior was kind of interesting looking too). It also turned out to be a night of live music, so two young girls were playing piano and a young guy was playing chello there. They were good. Nice timing. 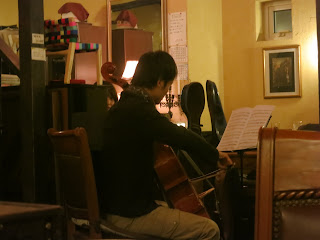 The place turned out to be scarily cheap. We paid 5000 yen for all the drinks and food we ordered, which is about half of what I would have expected in a place like that.

Dinner with my colleagues 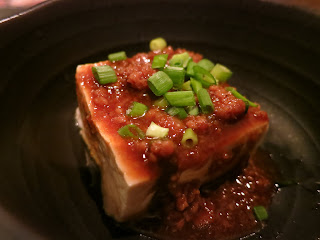 Ever since one of my colleagues broke his thighbone, our almost weekly "have dinner and strange discussions" custom has been put on ice, but last week we finally got out again. We went to a cheap izakaya and had lots of good food, and some fun discussions.

A few more zombie Jonas pictures from other people

Gluing a zipper to your face


Yesterday it was finally actually Halloween, so I decided to glue a zipper to my face and paint the rest like the zombie style I had previously. I bought a longer zipper, and 20 cm turned out to be just about right.


I was thinking of painting everything "inside" the zipper with fake blood, but decided to try painting it black instead. That was perhaps not the best idea, because it made the zipper kind of hard to make out from far away. Next time I should have a more visual zipper too, I guess. But the black paint is much less itchy and does not stick to everything like painting yourself with syrup (fake blood) is, so there are benefits too.


I went to a place where a friend works, and people from nearby bars also came in to take pictures with me. Then my colleagues in the magic bar called and said that there were some girls in the bar that wanted to see me (or more specifically my make up, but since it was stuck to my face that would mean seeing me) so I went there and took some pictures with them too. I also had to do some magic for them, and for a regular customer who was visiting the bar too. Then most of the customers left and we played card games for a few hours.

Finally, I visited another place were another friend works. There I ran into another customer from our magic bar, who bought me drinks in return for me posing with the women he was drinking with for some pictures (I would have posed for free too, of course).

My first try at gluing a zipper to my face, step by step