Last week it was time for the yearly street performer festival "Dai Don Den" here in Sapporo. The first day it was raining, so very many performances were cancelled. The second day the weather cleared up and pretty much everyone could perform as planned.

I watched a lot of performers. Some I had seen before, some were new to me. All the ones I watched were great.

My number one favorite this year was Kanou Mami. She did some magic tricks in her pantomime performance. She also performed in the rain during the first day, which gives bonus points, haha. I watched her twice, and the performances were slightly different. Both had lots of very surreal humor, which I like.

She did a fork bending magic trick, where the fork broke in the end. Then she pulled forth a cute teddy bear and played with it so it looked like it was alive. Then she did the fork bending routine with the teddy bear, with it being ripped in two and spewing forth lots of blood... She did some very funny performances of trying to sing enka (the best use of the "walking against the wind" pantomime I have seen) and trying to find love in the audience. She had some funny and clever use of words written on her clothes too, changing from "looking for a lover" to "look carefully please" to "collecting money" (恋人募集中→集中→集金). 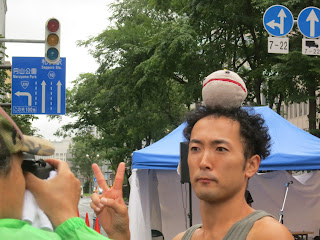 The juggler Tomohiro Morita also performed in the pouring rain. He used diabolos, did some contact juggling with clear spheres, juggled with a hat, but mainly he juggled with balls. He is very good. He throws up balls in the air and then spins around in place an unbelievable number of spins and then catches the balls and continues juggling, and he juggles seven balls and throws them into the air, spins around in place and the catches all the balls (the last one being caught using his neck, not his hands). 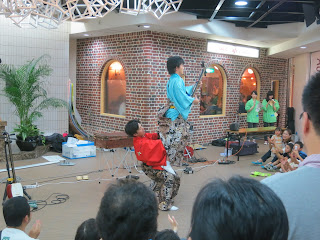 The Seshami Street Boys play the traditional Japanese instrument shamisen in traditional and nontraditional ways. They claim to have one world record for street performances, namely the oldest average age of their audience. Shamisen is popular with older Japanese, and they do tend to have a high average age among the spectators. They play in traditional ways, but they also use things like spatulas to play their instruments instead of the traditional tools, and they play in difficult ways etc. I bought their CD last year, and I got one more CD this year too. 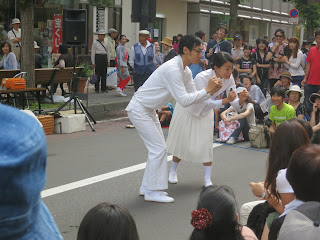 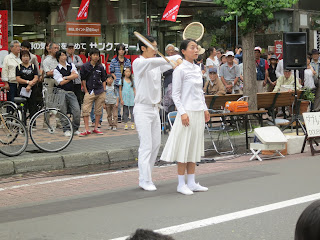 Another pantomime performance I saw was done by SIVOUPLAIT (what the Japanese writing of "S'il vous plait" looks like if you write it with Latin letters again). They had some very clever pantomime routines, playing tennis, using fans for illustrating weapons or music instruments, and much more. 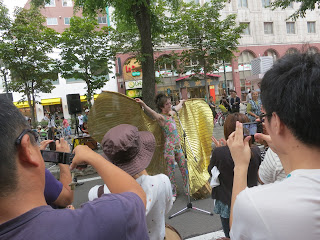 I saw Sexy Davinci last year too, but he is a lot of fun so I made sure to catch one of his performances again. He does some juggling and baton twirling (and does it very well), but mainly he just tells everyone about how great he thinks he is in many different ways. Very funny! He strips down to less and less clothing (though it is not less gaudy) during his show, and afterwards when people are handing him tips he says you can touch his ass if you want to too... He claims he has an exceptionally nice ass, though I did not check if it was true. 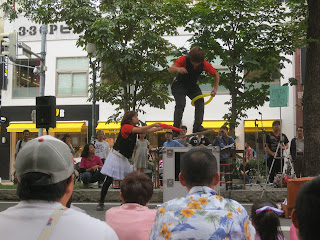 The pair "Patatonic" were funny. They did some juggling, some balloon art, and some balancing acts. 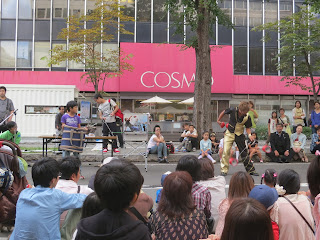 I saw Performer Yu-ki two years ago. Then he did diabolo. This year he did a lot of yo-yo stuff too (very very impressive), as well as his very impressive diabolo routine. He also did some PET-bottle tricks (crushed a bottle and then blew it back up to normal size with his impressive lungs), and his way of talking is very funny. He is quite rude, if you take it the wrong way, but in an entertaining way. 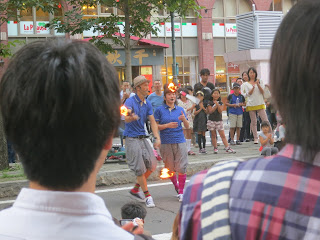 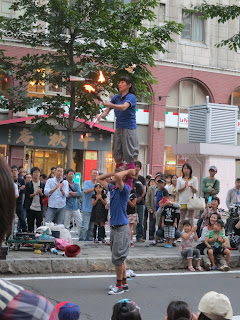 The final performance I saw was Akira Kawahara and Yuko Okuda. They juggled with fire, though I only saw the very last part of their show (Yu-ki went over his allotted time by 20 minutes or so (though it was mainly because the group before him did not finish on time)).

I also saw a lot of other things, though I did not stay around for the full performances. I saw belly dancing, some sort of fashion competition, people wearing weird clothes (among the performers this is to be expected, but here I was referring to people just watching the event), and some friends also there to watch the performances.