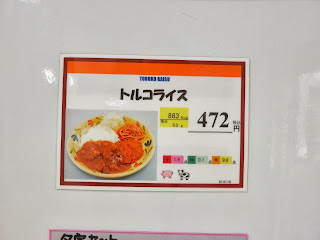 The naming actually ended up as Turkish rice by chance. It started out as "tricolor rice" or something along those lines, indicating three colors (three types of food) like in for instance the French flag. This is "torikoro" in Japanese, and since any word that is more than two or three syllables tends to be truncated to just the head of the word in Japanese, this was cut down to "toriko". This sounds like "toruko" (the "u" is mostly silent, and the "i" can be silent too), which also is an actual foreign word used in Japan, so people ended up thinking this is what the dish is called. At least according to my Japanese sources, this is how the very much not Turkish dish ended up being called Turkish rice in Japan.
Posted by Jonas at 3:51 PM