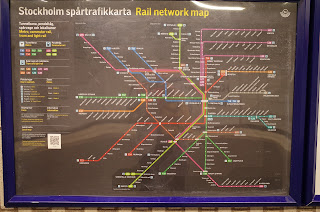 This is a map of the Stockholm subway and tramway network. The red, green, and blue lines are subway lines.

The public transportation in Stockholm is actually quite good. If you stay for a month, the one month free pass is also pretty cheap, considering the huge area you can visit. If you are in Stockholm for only a few days, it is pretty expensive, though.

The trains are surprisingly non-punctual (in Sweden, being on time is considered very important and being late is rude, so you might expect trains and buses to be on time but they are very often not) and in winter the public transportation companies are always surprised that there is snow and the whole system usually breaks down. But apart from that it works quite well. There is service throughout the night too, which is nice (in Japan the only option after midnight is taxis).
Posted by Jonas at 10:06 AM