Weird things in your suitcase 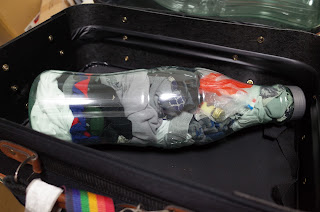 When going back from Sweden I had quite a few strange things in my suitcase. I bought some licorice root extracts (because who doesn't want to make food that tastes of licorice?) and some salmiak salt (chemical stuff that tastes like licorice), since that is not available in Japan. I also keep buying fun props that may or may not be useful for magic tricks. This time I found a shop that sold huge CocaCola bottles for 10 dollars. So I bought two. This meant I could not fit anything else into my suitcase, so I had to fill the bottles with all my clothes and other luggage...

I flew from Stockholm to Helsinki, and then from Helsinki to Nagoya. And from Nagoya I was going to fly to Sapporo. Upon arriving in Nagoya I had a small delay. I was politely dragged into a small room far away, where they frisked me, took out everything from my pockets, and unpacked everything from my bags. 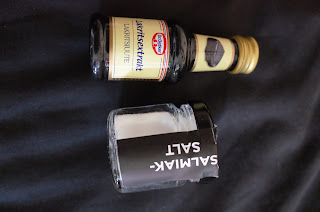 We talked for 30 minutes or so about how wonderful it must be to work at Sapporo's most prestigious university, and whether or not my bags contained drugs (they do not). They kept showing me photos of different types of drugs and asking if I was sure I did not have any of these in my bags. They also explained that "even marijuana" is considered an illegal drug in Japan, so even having that would qualify. I told them that I did not have any drugs and they kept asking and unpacking my bags.

Since I had a kilo or two of magic props, once they reached those parts of the bags, there were many many suspicious looking items. There were many: "And what in the world is this?!" After a while they asked if I do magic. But by the time all the weird props started appearing out of the bags, they seemed pretty relaxed and they thought it was funny that I did magic. 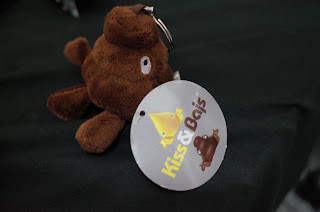 But apparently I look like a drug smuggler. And they also thought it was suspicious to have "only two" heavy bags when visiting Europe. I had plenty of time between my flights, and the flight to Nagoya arrived early so I still made my connecting flight to Sapporo. Once they let me go from the customs, I hurried to the domestic terminal where I again received special treatment at the security check and had to be frisked, and remove lots more things than most people. So I guess I also look like a terrorist, haha. But the customs people told me that it was one of the drug sniffing dogs that had indicated that it thought my carry on bag contained drugs (which of course it did not). They also said that sometimes the dogs indicate for other reasons than drugs, but since they are dogs you cannot really ask them about why they do what they do.