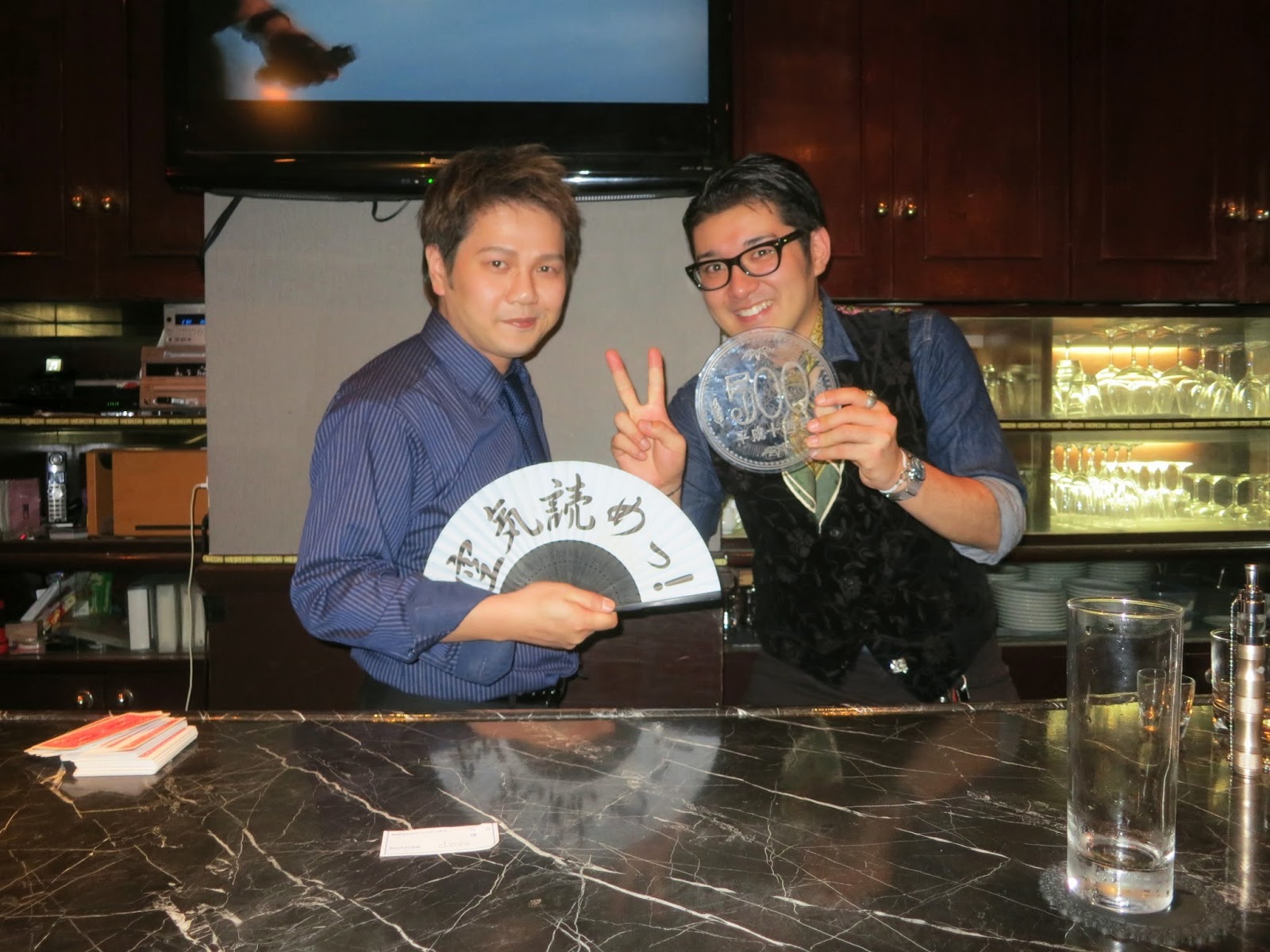 After visiting Nishioka, Hiro and I returned to Red Carpet. There I got to see another magician called Nishi do some magic. He used a Japanese 500 yen coin, which later turned into a clear glass version of a 500 yen coin. Which then kept growing and growing to larger sizes. 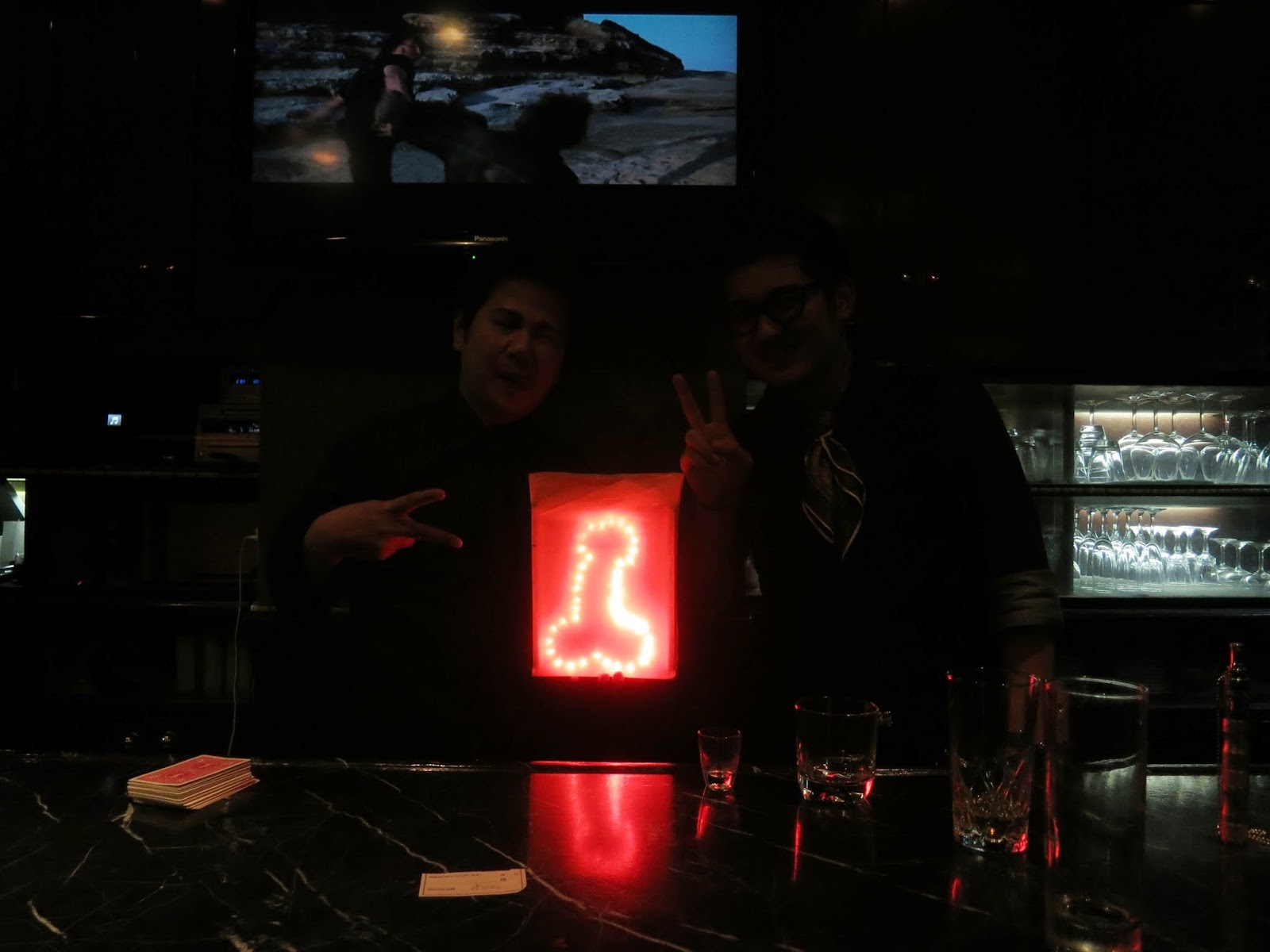 There were other guests there as well, and Hiro also did a big show at the counter. He did his normal impressive stuff, but he also started doing strange tricks like producing unlimited numbers of small rubber penises and making them light up. When I asked to take a photo of them, he brought out a paper bag with lights that shone along the same theme, and the camera was overwhelmed by this light so you cannot really see the magicians in the photo either. They thought that was great, but the girl sitting next to me thought it was not great, so she suggested taking another photo. The result is the top photo of this page (fairly normal).


This girl was one of the girls from the night before, who was there again. When all the other guests left, Hiro decided we should all play darts, in teams of two. He and Nishi are really good at darts (perhaps they spend the time when there are no guests there playing with the darts machine), I suck at darts, and the girl was very drunk and not that good at darts when sober either (she said). So as luck would have it, I was paired up with her, and we of course lost badly. The losing team then had to take shots of tequila. Then we changed teams, and repeated the process. No matter what team I was in, my team always lost, though.

After drinking lots of tequila, we changed to card games instead. We first played "babanuki" (which means almost the same as "old maid" in English, and the rules are the same as for that game). This is mainly a game of luck, so I was worried that I would be stuck with even more tequila, but I got out safely very quickly. Then they changed to games based on skill, and I was safe for the rest of the night. They thought it was impressive that I could clear the table in memory games after having lost that many times in the tequila darts games, but it was not that much alcohol, and keeping track of cards is not that hard.

In the end, it was a lot of fun, but every time I was about to leave someone would say: "What? It looks on your face as if you are about to leave. You cannot leave NOW of course!" Always for some fairly unconvincing reason. In the end, I got back to my hotel just in time to have one hour of sleep before having some hotel breakfast and going to the airport. Luckily, the flight from Fukuoka to Sapporo is quite long, so I got a lot of sleep on the plane. And then I went straight to our university to work the rest of the day too.

In the plane, I ended up sitting in the seat next to one of my colleagues also going back to Sapporo from Fukuoka. This was by chance, but not that much of a coincidence since there is pretty much only one flight to use for use in this situation, and unlike the Sapporo-Tokyo route where they fly 777s, between Fukuoka and Sapporo they fly 737s, which have much fewer seats.