Meeting people on the road 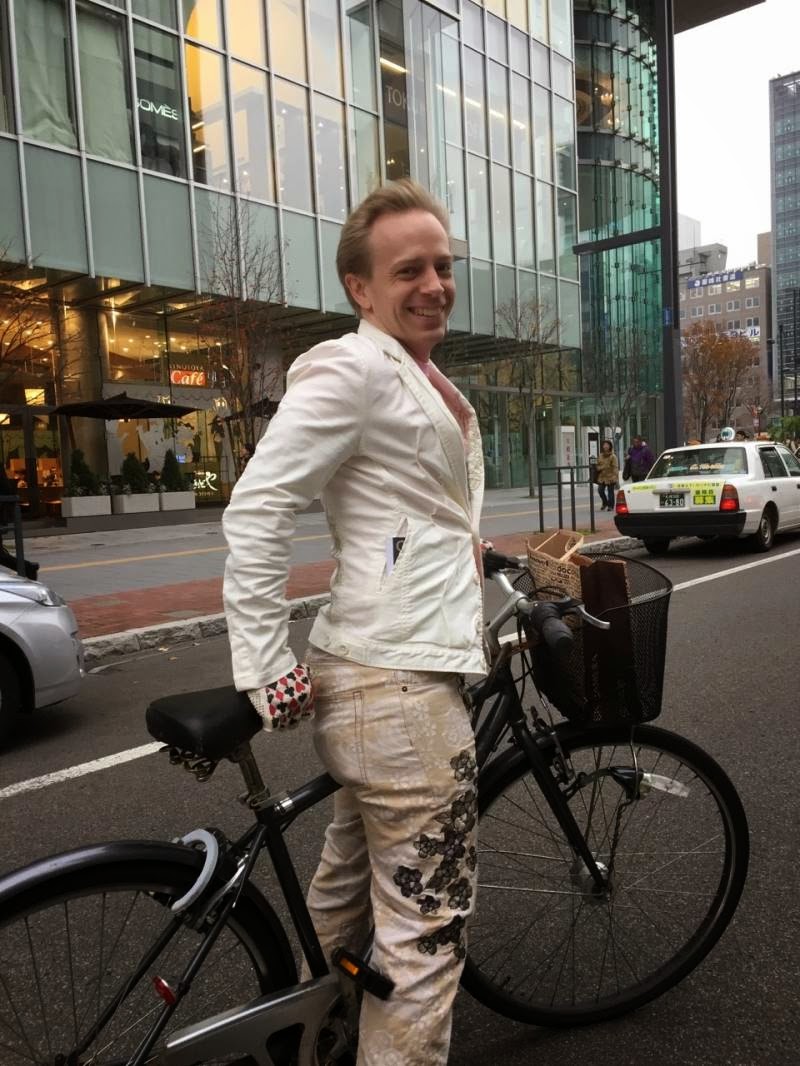 I went to Bic Camera with yet another broken camera a while ago. On my way back home, someone shouted "Jonas" from a car that was passing me on the road. It was one of my magician friends and two people we know who work at Bic Camera. They had bought a big TV to use in the magic bar. After they passed me and waved to me, I pedaled on and caught up to them with my bicycle. When we got a red light we talked a bit, and they took this photo of me. Then the light turned green and I set off at high speed and left them behind, haha.

My camera broke during the Halloween parties, which was bad timing. The flash no longer fires. So far I had two Sony cameras that broke soon after the warranty expired. One is completely dead and does not react to anything, one has got stuck in some reverse stabilization mode where it shakes the lens like crazy all the time and all photos of course end up super blurry. You can tell the color in the general scene but you cannot tell if you are photographing a house or a dog, for instance. One camera died after I already bought a new camera, so it was not so much of a problem, while the other died during the last big magic show I participated in for the university club, so I have no photos from that time...

I also have a Canon camera. It got a "lens error" that was a manufacturing problem of this series. I got the lens error with about one week left of a trip abroad, so I have only a few pictures from the start of that trip, but when I got back to Japan I got a replacement camera for free, which was at least convenient. This replacement camera then broke half a year later. It is still usable, but if you use it outdoors in the winter, a large part of the pixels on the display stop working. When you use the camera in warmer places, they work again, though.

My most recent camera is a Ricoh GR 5, which is a very nice camera with only the problem that it does not really fit in my pocket. Three months after I bought it I had to hand in for repair, and the problem was not covered by warranty. The camera is very expensive, so the repair was pretty expensive too. Now it has been another four months, and the flash on this camera now died during a Halloween party. Apart from the flash not firing, the camera works perfectly fine, though.

I handed the camera in for repair, and since it was not my fault this time and the camera is still under warranty both from the maker and from the extra warranty from the store I bought it at (since all my cameras break, I usually add the extra warranty), I was hoping they would fix it for free. They called me two weeks later and said that the problem will not be covered by the warranty. I was thinking that at least it is just the flash, so it should be cheap, but they said it will cost 40,000 yen (the camera costs 60,000 yen to buy new), which is three times more than it cost to replace the whole LCD display (which they did last time I had the camera repaired).

So I am now leaning towards not having it repaired and just keep using the camera without the flash. Most days I never use the flash. The most interesting photos I have are from very dark places (like Halloween parties), though, and there the flash is necessary. In the near future I will be at several events (doing magic) in very dark locations.

I could also just give up on this camera and just buy a new camera. If I were to buy a new camera right now, the best model to buy would be exactly this model, though... and then it would be cheaper to just repair the one I have. But that one has broken twice already, so it may be likely to break soon again (and the warranty never helps me, it seems), so buying a new camera of the same model may be better.

I could wait until the next wave of new cameras are released, since the advances in digital camera area are many and quick. But if I buy a completely unrelated camera in January I have all these extra batteries and battery charger (the GR comes without a battery charger; you can charge the battery in the camera using the USB port) that I bought that I will not have much use for anymore.

I could walk around with my Canon camera that has a flash but does not work when it is cold and with the Ricoh GR to use when I do not need flash. Then I end up with so much luggage that I might as well buy a big system camera instead.

None of these options are that great. I am leaning towards not having the GR repaired, keep using it without flash, and just cry whenever there are great photo opportunities that I miss because the flash is not working. And then buy a new camera next autumn. Since I have now had Sony, Canon, and Ricoh break on me at numerous times, I guess I might try Nikon next...
Posted by Jonas at 12:38 PM