When I travel I try to find time to go see other people do magic. I like magic, and it is also educational to see how other people present standard tricks or see original things they may be doing. 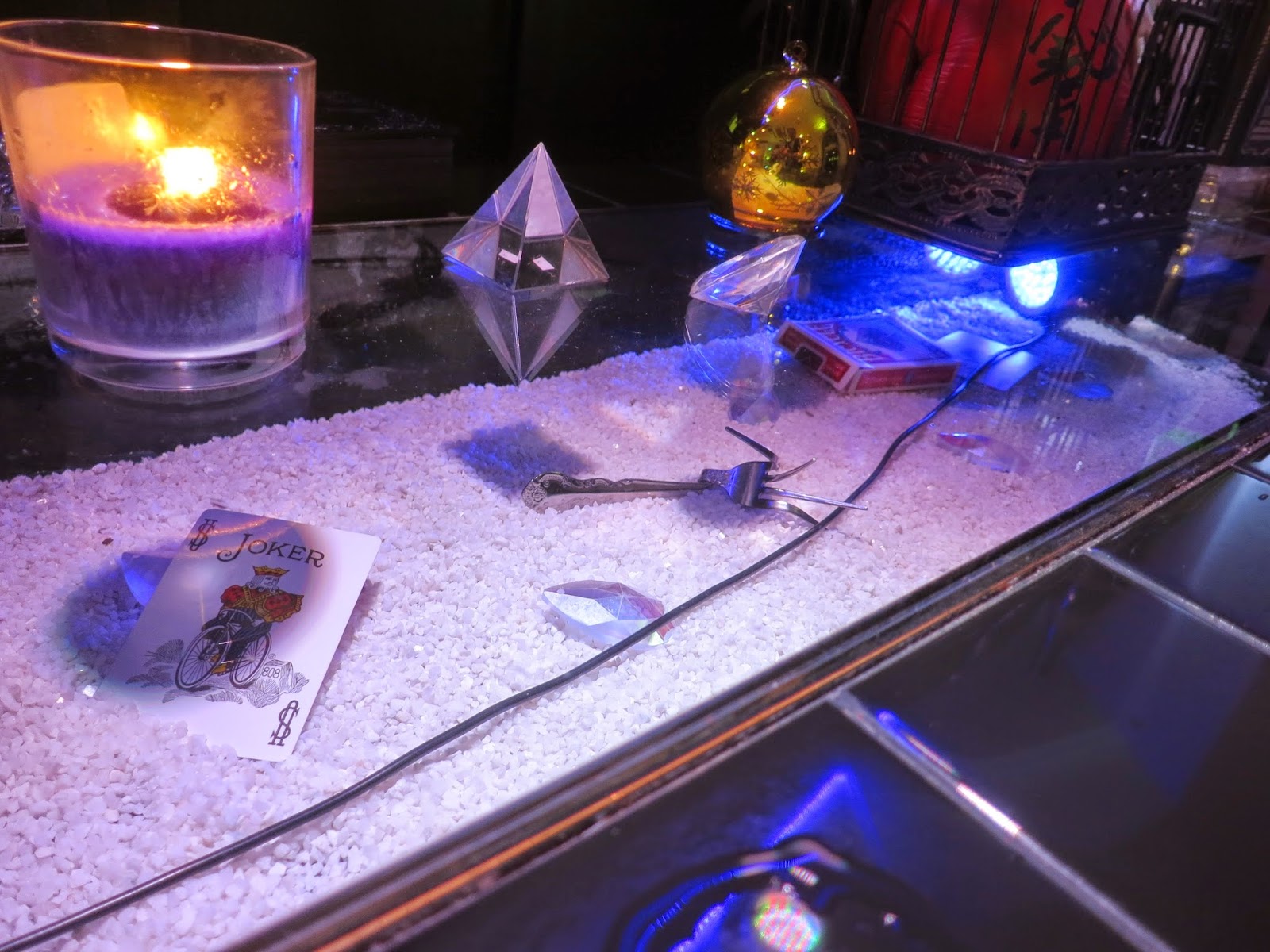 In Fukuoka there are several magic bars. I had been to two of them before and decided to go to another one for a few hours before I had to get back to my hotel to be able to get up early for work the next day. I went to Fushigiya, which means "the place of strange things". 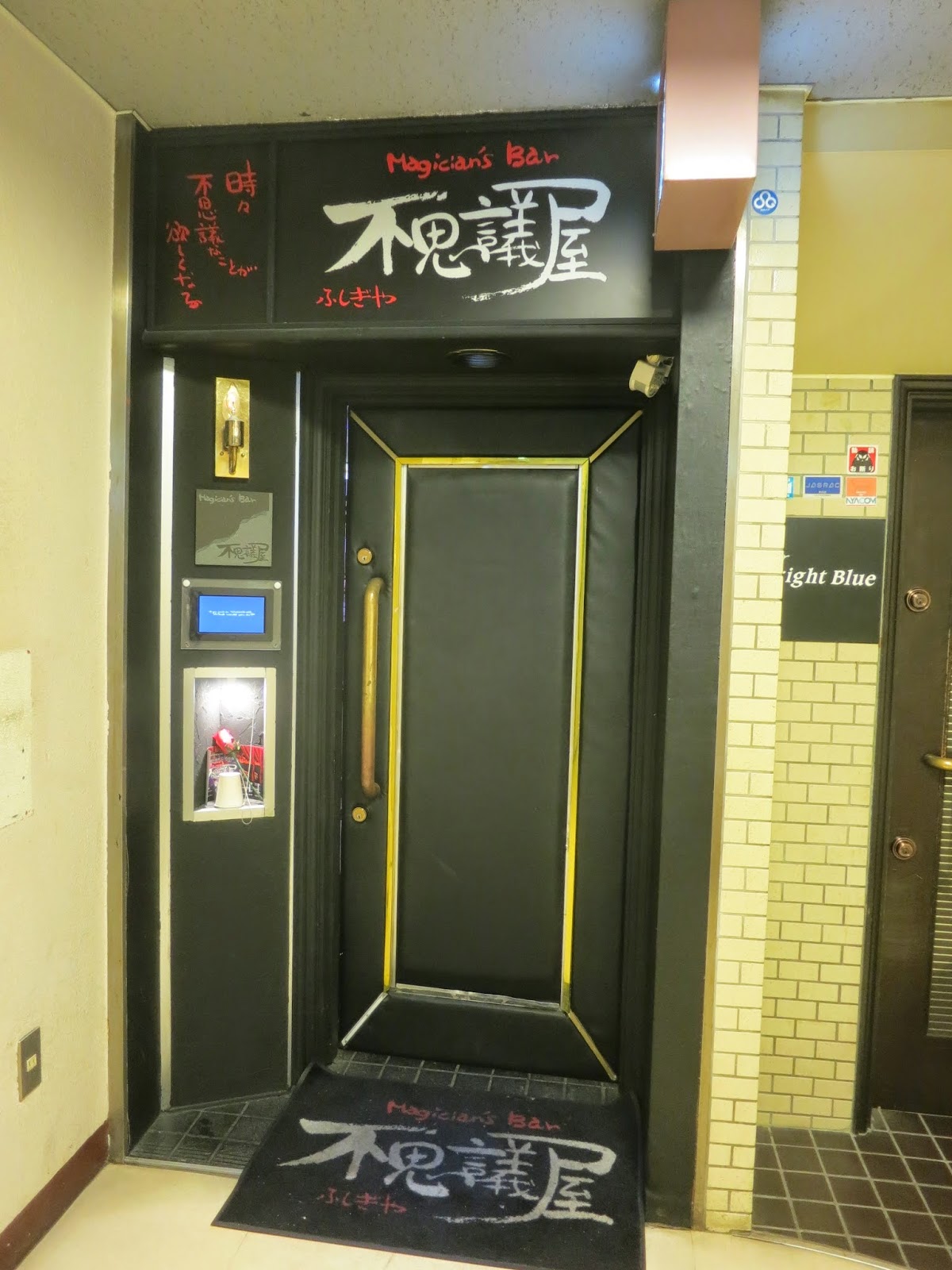 The first challenge was to get through the door. Many magic bars have weird doors that do not open the way you would think, so you have to solve a puzzle before you even get in. I am told some do this on purpose so they can avoid getting people who are too drunk to be interesting as customers. I find it mostly annoying, but the intention seems to be a clever and funny puzzle. I have had to navigate through doors where the handle is on the wrong side of the door and you have to push on the other side, a door that opens only in the middle of what looks like a door, etc.


Once inside, I met one of their regulars and the magician U. He showed me some magic and his style was quite different from most other magic bars. He also used pretty original props. He showed me some cigarette magic, some cup and balls stuff, some rope magic, and a trick with an egg. We also talked about magic and magicians. 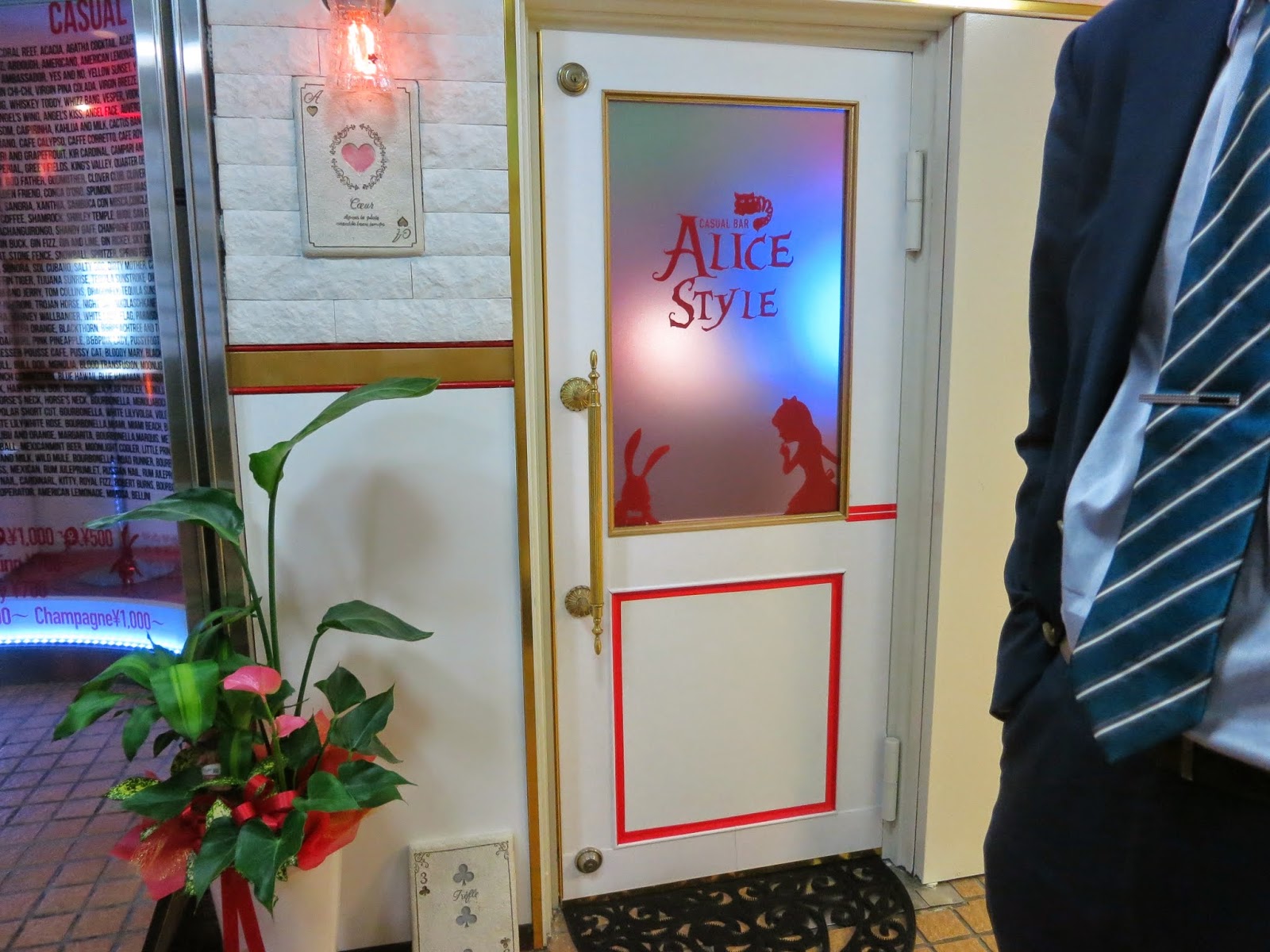 After a while he said that since no one else was coming, we should go downstairs to the newly opened bar Alice Style, which he also owns (if I understood correctly). Right then, three new customers showed up, but in the end we brought them with us too, and we all went down to Alice Style to see the magic there instead.


In Alice Style there was a young girl dressed as Alice in Wonderland who turned out to be from the same small village in the middle of nowhere as the three people we had come there with, so they talked about that for a long time. We also got to see quite a lot of magic, and there was a guy who does magic as a hobby drinking in the bar too. U asked him to show something, and he did. Then I was asked to do something, so I did two tricks that went over very well (they usually do). Later, another hobbyist came and he was also asked to show something. 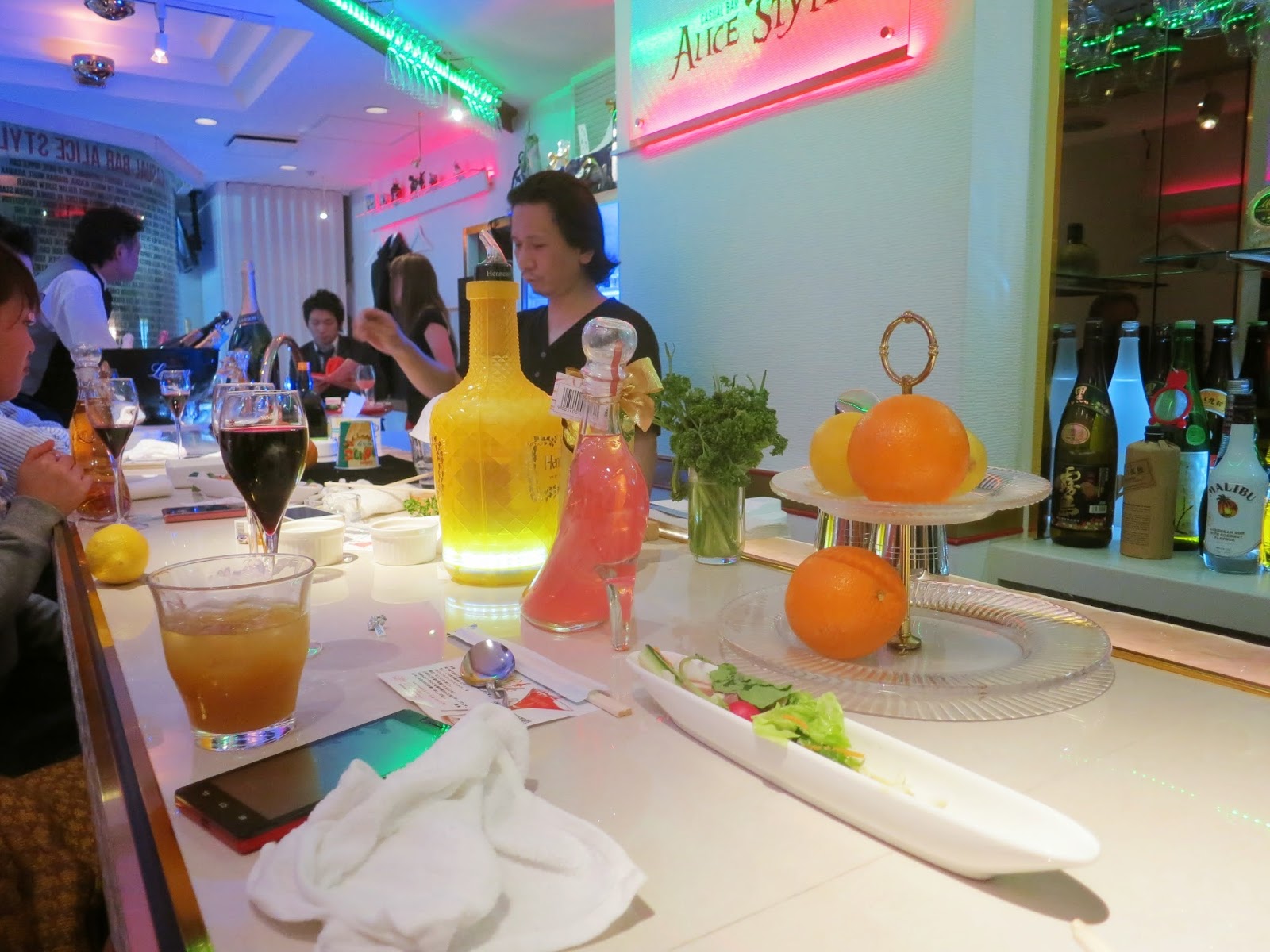 Magician U of course did most of the magic, though. He did the cup and balls with cups of potato chips again, he did some magic with tissues, with chopsticks, and more. It was a lot of fun. The girl dressed as Alice was cute and funny, and the other girl working there was even cuter (no idea if she was funny; she was busy talking to a customer at the other end of the bar the whole night), and the bartenders working there were very nice too. Magicia U was funny and nice. And the place looked nice. And the other guests were nice too. The only downside was that one drunk man was so impressed with a small plunger prop (an iPhone accessory) that I used that he played with it too furiously and it broke. I have more of them, but only one more in that color (the best color), and had of course only brought one to Fukuoka. 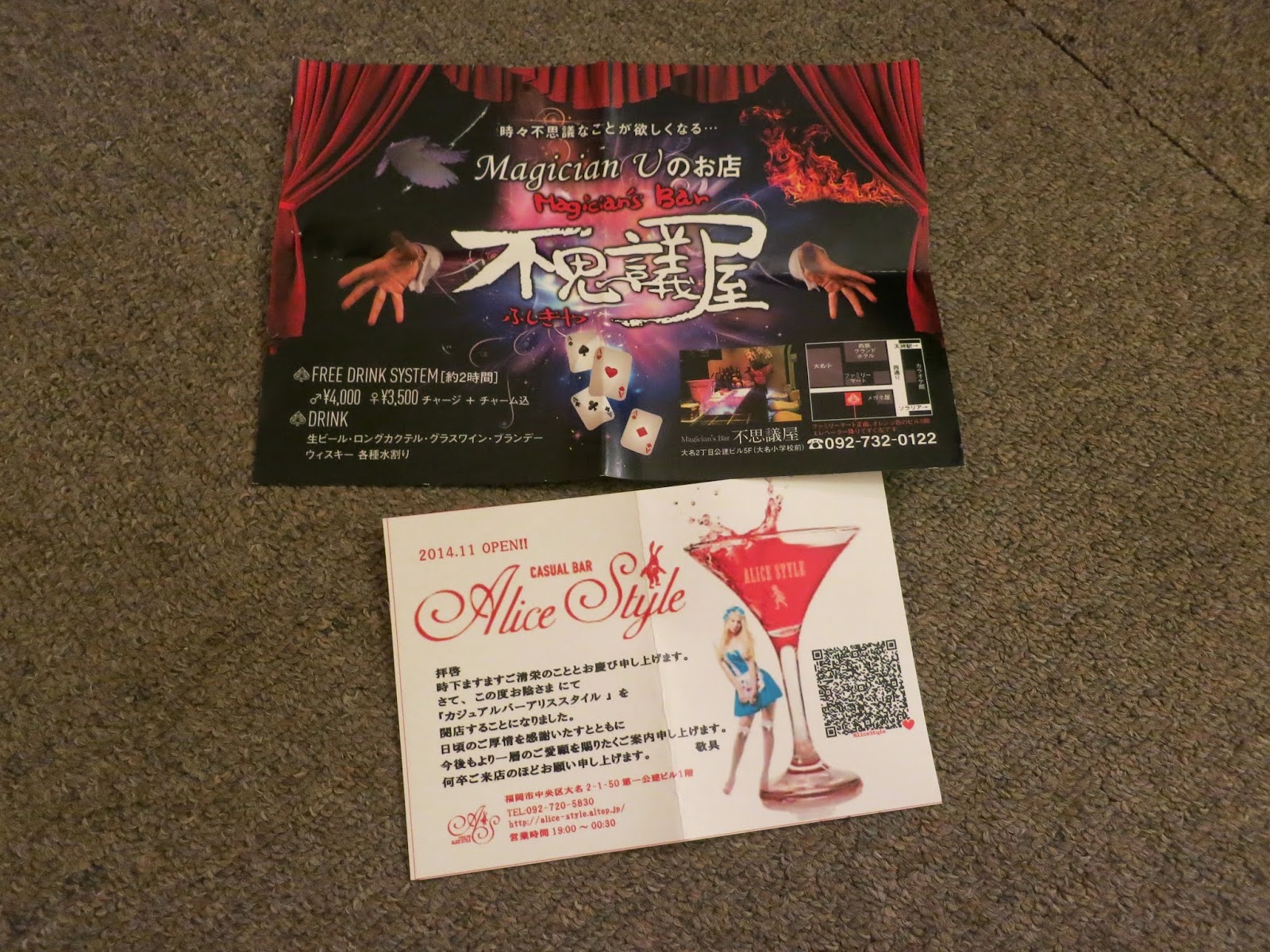